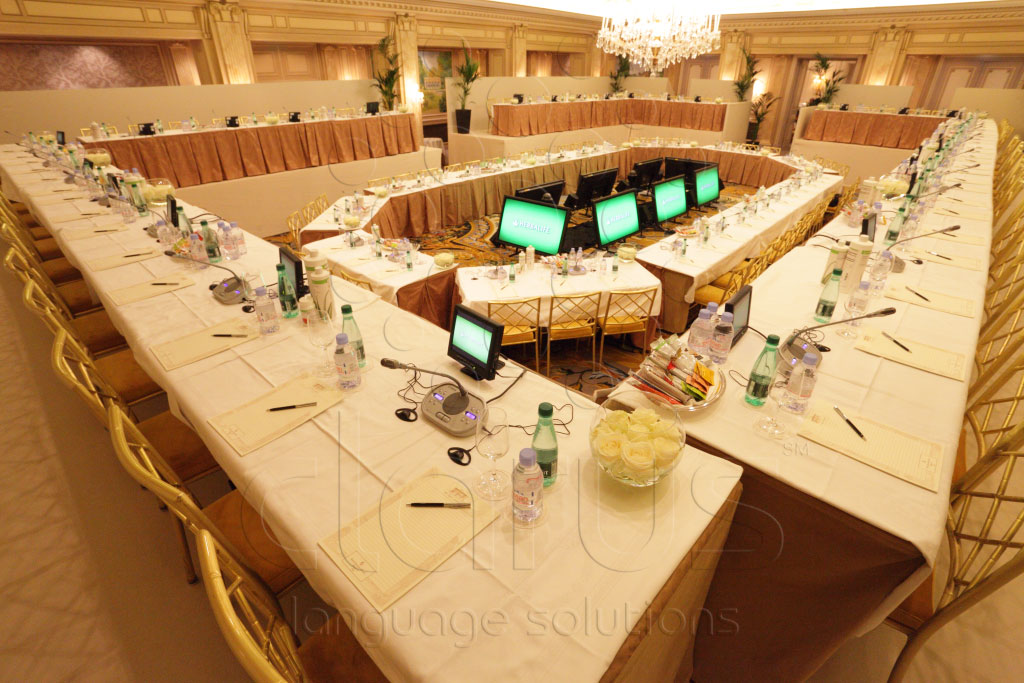 The answer is relay interpretation. A common language, normally English, is used as the floor language. Let's take for example an event with Spanish, French and Russian interpreters and English speakers on stage. Normally all the interpreters would be interpreting directly from English into their native language. In the event that a speaker needs to speak for example Spanish, a Spanish interpreter would reverse and interpret into English. The Russian and French interpreters would automatically be switched over to listening to the English feed coming from the Spanish interpreter which they would then seamlessly continue to interpret into Russian and French. Upon the Spanish speaker finishing and the floor returning to English, the system would revert back to its normal condition. Only a few systems in the rental market are able to provide this functionality up to 32 languages at once, an example being the Bosch DCN Next Generation system. The system enables seamless communication by removing the high chance of error or confusion that might otherwise naturally occur when dealing with multiple language combinations.
Matthew Field - 1 decade ago
Keywords: consecutive, equipment, google, interpretation, interpreter, rental, search, simultaneous, terms, translation, translation equipment,
Top

50 guests were able to enjoy seamless multilingual participation in their prestige event thanks to the faultless operation of the interpretation. A system that performed flawlessly as expected in an application where nothing could be left to chance, several hundred miles out at sea where replacements are not an option.
Matthew Field - 1 decade ago
Keywords: avon, bosch, caribbean, event, integrus, interpretation, next generation, ng, sea, simultaneous, st thomas, yacht,
Top

Click to view large
We are proud to announce that we've been awarded the contract for the 2011 Chiefs of Defense Conference to be held in Hawaii this October.

The Chiefs of Defense (CHOD) Conference is a meeting of senior military officials from over 20 countries in the pacific region. Central to its mission is promoting multilateral cooperation among these nations. With this aim, the organizers of CHOD conference demand only the best interpreters and equipment.

This year, we will be providing simultaneous interpreters and equipment for 13 different languages (including English), in addition to push-to-talk discussion systems and audiovisual support.